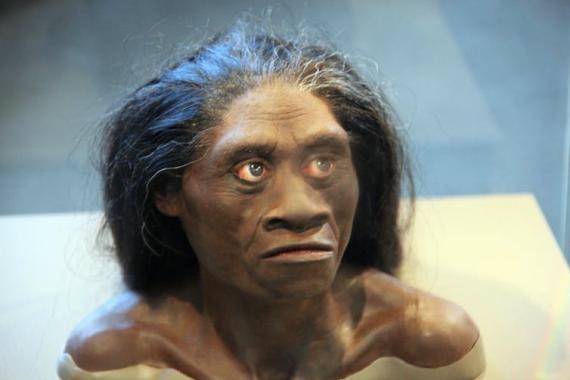 We Homo sapiens are critically dependent on our environment. Despite being arguably more versatile than any other species, we are nevertheless thoroughly adapted to the climate conditions and resource constraints that have accompanied our evolution over millions of years. Determining how human evolution has been tied to both environmental change and competition between rival human species as the genus spread across the planet is a source of intense fascination and continued debate. Within this global debate the origin of the diminutive species Homo floresiensis –discovered in 2004 on the Indonesian island of Flores– provides a particularly fascinating case study. This enigmatic species shows an extreme dwarfing process in an apparently short time for evolution, raising questions about its actual origin and the processes (see, e.g. A. Gomes-Robles Nature 534: 188-189, 2016).

A well-known but essentially qualitative eco-geographical rule states that large species arriving on islands reduce in size once they hit the constraints of their island resources. However, how quickly this can happen has been a subject of intense debate; while some argue that shifts in body size require long periods of isolation from continental populations, others claim that these changes can take only a few tens of generations. In a paper published in Proc. R. Soc. B in 2017 (Diniz-Filho and Raia), two of us used quantitative genetic models to evaluate body size and brain size differentiation between Homo erectus (as a potential ancestor) and Homo floresiensis under an island rule scenario, showing that rapid changes in these traits are plausible. However, the rapidity of the climate change we have recently unleashed puts this question into sharp relief, for the combined effects of a shifting environmental changes and isolation could trigger rapid evolutionary changes.

In a new paper published in Biology Letters we expand these analyses to accommodate more realistic scenarios of population growth and past climate oscillations in Flores island. We developed an Individual-Based Model (IBM) to simulate body size evolution under more complex but biologically more realistic parameters. This IBM incorporates distinct evolutionary processes –including explicit genetic components– and allows us to calculate the time for adaptation of an inmigrant Homo population to a novel island environment. In the new study the environment itself also evolves continually in response to climate change, which then affects demographic patterns on the island over the course of the last million years, on the basis of widely agreed first principles of population and quantitative genetics. This new model shows that dwarfing occurs orders of magnitude faster than has been assumed by some earlier authors (i.e., about 350 generations) under a realistic set of demographic and genetic parameters. This model is validated by generating selection gradients close to values commonly estimated in natural populations.

Our work shows that a process of rapid adaptive evolution explains why H. floresiensis dwarfed from its large-bodied ancestor so fast, solving recent debate about the oddity of its origins, The recent discovery of a new dwarfed species in the same region, called Homo luzonensis (Detroit et al. Nature 561, 181-186, 2019), suggests that such an adaptive response is not uncommon in humans, and obeys the same overall biogeographical principles driving evolution in many other large-bodied island mammals. Our model sheds light on such population processes, thus contributing to a better overall understanding of how our own evolution is intimately tied to our stewardship of the environment.