Tool developed to estimate the economic value of natural resources 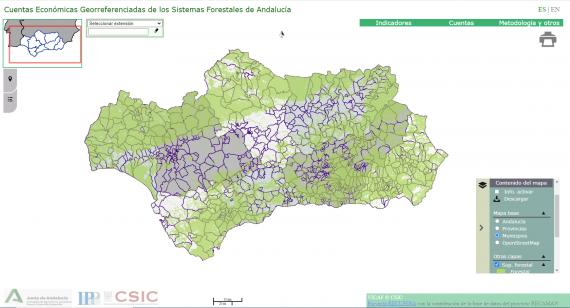 What is the value of a forest? In economic terms, what does a road contribute in comparison to an area of forest? What services are provided by natural areas and how can they be valued? These are some of the questions which the project ‘Income and Capital valuation of the Andalusian ‘Montes’ (forest) attempts to address, led by the Environmental Economics Group of the Spanish National Research Council (CSIC) and developed with contributions from 9 institutions, among which are the four research centres belonging to the CSIC. Within this initiative an online georeferenced viewer has just been launched showing the natural biophysical and economic resources of the ‘Montes’.

RECAMAN, which arose from the Andalusian government initiative, constitutes a methodological response as recommended by the United Nations in the most recent version of its System of Environmental Economic Accounting - Ecosystem Accounting (SEEA EA) manual, approved in March of this year, to quantify natural biological resources at global scale.

The CSIC centres taking part in the project are: the National Museum of Natural Sciences, the Institute for Public Goods and Policy, the Institute of Social Studies of Andalusia and the Experimental Station of Aula Dei.

“We have developed a method for inventorying natural resources - ranging from timber extraction to CO2 sequestration and including recreational benefits provided by the forest – giving a total economic valuation.  So far we have applied this method in Andalusia but it is valid for any natural area of the planet”, explains the project coordinator, Pablo Campos Palacin, who is a researcher at the Institute for Public Goods and Policy (IPP-CSIC).
Javier de la Torre, from the Agency for the Environment and Water of Andalusia, points out that “If the real costs and benefits of the forest are known, improvements to the production systems for timber and other resources can be made and a balance struck between this production and conservation of the forest. The aim is to establish policies for protection and appropriate use”.

In the specific case of Andalusia, the forest systems are characterized by a high diversity of products (grazing, hunting, timber, firewood, honey, mushrooms, cork, pine cones, aromatic herbs…), with a strong presence of non-wood forest products. This means that these forests are highly important for the local economy but of scarce importance for international timber markets. They are areas with high environmental value, providing services such as the recreational use of natural areas, CO2 sequestration or those related to the biodiversity of Mediterranean forests, for which scarce information exists with regard to their economic contribution whereas plenty of data is available on the high public spending required to preserve them. Those responsible for the project stress the importance of considering these tools in the development of new environmental-economic policies.

The research has been embodied in more than 25 scientific articles. One of these articles, published in the journal Ecological Economics, explains the indicators of goods and services provided by ecosystems in natural areas. Specifically, the researchers have valued more than 20 activities, among which are private production of timber, cork, firewood, pine cones, livestock farming, conservation forestry, hunting and environmental self-consumption by the landowners. Other public activities have also been taken into account such as recreational services, preservation of threatened wild biodiversity, surface run-off water storage in reservoirs, landscape conservation services, mushroom gathering and CO2 sequestration.

Four research centres belonging to the CSIC are collaborating in this initiative, promoted by the government of Andalusia and recommended by the United Nations

“To ensure that the valuations of public goods and services can be joined with those for private products we have simulated the existence of direct payments by consumers for the public goods and services provided by the forests”, clarifies Campos Palacin. Eduardo Moyano, researcher at the Institute for Advanced Social Studies (IESA/CSIC) says that: “Particular importance was placed on the social aspect of this project, which has always had a multidisciplinary approach. To carry out a robust valuation of the services, highly labour intensive data collection and analysis was carried out by the IESA-CSIC through surveys of households, visitors to natural areas, recreational hunters etc., with the aim of measuring the value which they give to the natural resources ".

“One of the most important values of this research is that, apart from providing a powerful tool to scientifically analyze the compatibility of land uses, it reveals how much money is lost by society when a forest is burned or an ecosystem is overexploited. It is easy to determine how much a government spends on maintaining areas of forest, but what is not so clear is what fraction of the GDP corresponds to ecosystem services which, thanks to this tool, can now be estimated. Personally, I believe that this methodology could allow society to recognize the worth of our natural assets and be aware that, beyond the emotional value, nature provides resources with a high economic value”, says Mario Díaz, researcher at the MNCN.

A project aligned with the European Green Pact

The results from the RECAMAN project highlight the success of this collaboration between more than a dozen Spanish scientific institutions among which are the various institutes of the CSIC, the Water and Environment Agency of Andalusia and the Department for Agriculture, Livestock, Fisheries and Sustainable Development.
This research work has given rise to the methodologies and information necessary in order to incorporate the multifunctional characteristics of the Mediterranean ‘Monte’ economy in the environmental accounting models of the European Union (EU), as opposed to the predominance, until now, of the characteristics of central and northern European forests. Furthermore, this work provides a response to the indications of the European Strategy for Biodiversity.