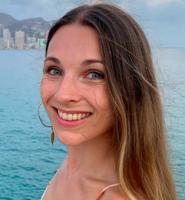 My research involves the use of Environmental DNA (eDNA) and population genetics to broaden our understanding of the endangered and endemic Spanish toothcarp (Apricaphanius iberus).

The Spanish toothcarp is considered one of Spain’s most threatened species due to the progressive degradation of its natural habitats and to the introduction of invasive species, such as the Eastern mosquitofish (Gambusia holbrooki). Throughout my doctoral thesis, I'll apply eDNA techiques to create an updated version of the Spanish toothcarp's area of distribution as well as that of the invasive Eastern mosquitofish to map out where both species coincide. l'll also carry out an intensive diet study using eDNA metabarcoding to determine whether the negative impact the Eastern mosquitofish has on the Spanish toothcarp is due to predation or a competition for resources. Finally, I'll conduct an extensive phylogeographic study using Single Nucleotide Polymorphisms (SNPs) to better understand the genetic structure of the Spanish Toothcarp's populations. The results of my studies will allow me to establish conservation priorities (Operational Conservation Units - OCUs) aimed at improving management decisions for ongoing and future conservation programs of the Spanish toothcarp.