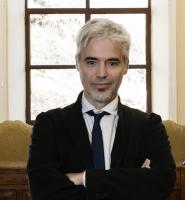 Miguel Bastos Araújo (Brussels, 1969) is a biogeographer seeking to understand how different facets of Life distribute in space and time, and why.  He uses a plethora of data-driven and modelling approaches to improve understanding of how climate determines the distributions of species and controls complex properties of self-organised community dynamics. Past, current, and future climate changes offer the context for much of his work because they provide a spatiotemporal laboratory for understanding change. The societal relevance of his work has led him to lead and/or contribute to writing of several science-policy documents, including reports for IPCC, DIVERSITAS, the Council of Europe, and the Spanish and Portuguese governments. He is also member of the Portuguese Council for the Environment and Sustainable Development (CNADS), an advisory council to the government, and appointed expert to the NATO programme for Science, Peace and Security.

With a BSc in Geography and Regional Planning from the NOVA University of Lisbon (1995), he obtained an MSc in Conservation (1996) from the University College London (UCL). He went on to read for his PhD in Geography (2000) jointly developed at the Natural History Museum in London and UCL.

The academic contribution of Araújo can be appraised by his publication record (>250 publications), by the attention his articles received by peers (he has been listed as ‘highly cited‘ by Thomson Reuters every year between 2014 and 2021) and by the track record of the scientists he mentored (over 60 researchers and students).

In recognition of his work, Prof. Araújo won several prestigious awards, including: the Ernst Haeckel Prize (2019) to “honour senior scientists for their outstanding contribution to European ecological science”; The National (Portuguese) Environmental Award "Fernando Pereira" (2019) for his contributions to raising the standards of applied environmental sciences; the  Pessoa Prize (2018) awarded to “Portuguese citizens whose contributions have been particularly relevant in the domains of arts, literature, or science”; the Rey Jaime I Prize (2016) awarded to researchers who contributed “to the improvement of our ecological environment”; the Royal Society Wolfson Research Merit Award  (2014); the IBS (International Biogeography Society) MacArthur & Wilson Award (2013), given to an individual “for notable, innovative contributions to biogeography at an early stage in their career”; and the GIBIF (Global Information Biodiversity Facility) Ebbe Nielsen Prize (2013) awarded to researchers that “combine biosystematics and biodiversity informatics in an exciting and novel way”. He was also awarded honorary membership to the College of Biologists of Portugal (2020), a honour that was for the first time given to a non-biologist.

A Complete list of publications can be found here.

Some videos about his work:

Improvements in reports of species redistribution under climate change are required

Standards for Models in Biodiversity Assessments