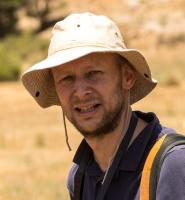 Climate change is a major challenge for biodiversity conservation, especially in the face of additional threats such as habitat loss and fragmentation. My research focuses on ecological responses to these interacting drivers, testing how climate and habitat availability influence the habitat associations, population dynamics, and ultimately the distributions and conservation status of species. The distributions and diversity of species at their range margins, over environmental gradients, and in fragmented landscapes form the model systems.

I have worked mainly (but not exclusively) on butterflies, and aim to apply the understanding gained about the mechanisms driving ecological responses to environmental change to propose guidelines for conservation - and in particular for adapting conservation to climate change.

My research is primarily field-based, and takes a multi-scale approach: from fine-scale studies of microclimate, population dynamics, habitat use and dispersal; through landscape-scale research into metapopulation dynamics (colonization and extinction); to large-scale patterns and processes of distribution change.

I am interested in the factors governing species distributions in fragmented landscapes, and the consequences for the responses to climate change by species at their geographic range margins. Much of my work on this topic has focused on butterflies at their northern range margins in Britain, and the implications for their conservation. I am currently supervising three PhDs on Lepidoptera conservation in the UK, working closely with the organisation Butterfly Conservation.

For twenty years I have conducted research on metapopulation dynamics in the Silver-spotted skipper butterfly Hesperia comma at its northern range margin in England, and how the processes of colonization and extinction influence its rates and patterns of range expansion in five replicate landscapes. The long-term research on Silver-spotted skippers has been fundamental in demonstrating the influence of habitat availability, microclimatic variation and the management of Protected Areas for the conservation of species in a changing climate.

Whilst at Exeter, my collaborations with Ilya Maclean and Jon Bennie established the importance of microclimate for understanding and managing the ecological effects of climate change. We have shown some of the first multi-species evidence that microclimatic variation created by topographic heterogeneity can buffer the effects of changes to broader climatic conditions on species populations, reducing local extinction risk in parts of England for species that are sensitive to climate change.

​Climate change is likely to be a particular threat to species at the “warm” low-latitude and low-elevation margins of their geographic ranges. The mountain ranges of Spain represent such environments for many European butterfly species. My collaboration with David Gutiérrez at Universidad Rey Juan Carlos showed that many species have suffered local extinctions at their low-elevation range margins in the Sierra de Guadarrama as regional temperatures have warmed, with consequences for regional patterns of diversity. My ongoing work in mountain ranges in southern Europe aims to test the factors influencing the capacity of these environments to act as ecological refugia from climate change.