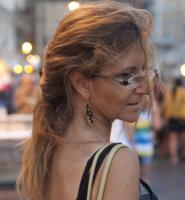 Dr. Ana Rey is a senior scientist working in the Department of Biogeography and Global Change since 2012 when she returned to Spain. Her expertise include biogeochemical cycles in terrestrial ecosystems and gas exchange between terrestrial ecosystems and the atmosphere in response to global change. My main research interest has been to study how human induced changes are altering the carbon balance of terrestrial ecosystems in order to understand how they will respond to global change drivers. In particular, I have studied the impact of increasing atmospheric CO2 concentration, increased ultraviolet radiation, increased temperature and changes in precipitation patterns, or land use changes on forests and terrestrial ecosystems. I have investigated at different temporal (from short to long-term predictions) and spatial scales (local and regional and European scale), and in different biomes (temperate, boreal, tropical, Mediterranean, Antarctic, and drylands).

I was trained as a Plant Ecophysiologists during my Ph.D at Edinburgh University. My thesis dealt with the response of trees to increased atmospheric CO2 concentration. After that I worked for several years as a postdoc in Edinburgh on several European projects dealing with carbon and nitrogen cycling in European forests (part of the CARBOEUROPE cluster and the international FLUXNET network) focusing mostly on soil carbon mineralisation and soil respiration. I have also worked as a research scientist in several Universities and International Research Institutions such as Biosphere 2 centre (Columbia University), National Centre for Atmospheric Research in Colorado, Stanford University or Davis University. As a Visiting Expert in FAO, I worked on a project dealing with carbon sequestration strategies in drylands. Living in Italy for several years, I have long collaborated with the University of Viterbo, CNR-Rome and INGV. I am currently an associated scientist of these institutions.

After 20 years working abroad, I became a permanent researcher at CSIC in 2007. Since then I have concentrated my research mostly on Mediterranean and arid ecosystems. Current research interests are the impact of human activities and global change drivers on terrestrial ecosystems, studying physiological and ecological processes and mechanisms ranging from microbial to landscape and global scales. Recently, I am working on a project to understand biotic and abiotic mechanisms of litter decomposition in drylands in collaboration with the University of Bangor and Hebrew University, litter decomposition of lichens and mosses in extreme environments in collaboration with Dr. Asunción de los Ríos, factors controlling carbon sequestration and carbon stocks in drylands of the world in collaboration with Dr. César Plaza and Prof. F. Maestre or the use of agricultural amendments to improve carbon sequestration in collaboration with Dr. César Plaza. I am also involved in studies dealing the impact of land use management on soil carbon in Africa or Russia in collaboration with the University of la Tuscia, among others. My main project now aims to understand the role of lithology as a modulating factor in the response of Mediterranean forests to climate change. I am also leading an international project aims to understand the impact of extreme events on coral reefs and mangroves in the Caribbean.