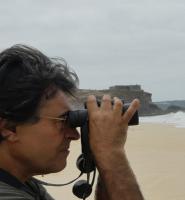 Mario Díaz got his PhD in Biology at the Complutense University of Madrid in 1991. After more than 10 years of university teaching (Zoology, Zoogeography, Ecology, Conservation Biology, Wildlife Management, Environmental Impact Assessment at the Universities Complutense and Castilla-La Mancha), he entered the CSIC as Associate Researcher in 2007. He has been the Head of the Department of Biogeography and Global Change at the National Museum of Natural Sciences from its creation in 2012 until March 2017. He is currently the President of the Scientific Committee of SEO/BirdLife International and member of the Scientific Committee for the official lists of Spanish Endangered and Invasive species. His work is focused on animal-plant interactions in Mediterranean ecosystems. He is mostly interested in the role of keystone species for the long-term sustainability of such systems, and on the ways human uses influence key interactions such as herbivory and seed dispersal. Conservation-driven policies aimed at improving sustainability of land use systems are also considered (https://www.researchgate.net/profile/Mario_Diaz10). He is integrated from 2007 onwards in three main research networks: the GlobiMed network (www.globimed.net), with leading Spanish terrestrial ecologists interested in forest management and restoration; the RECAMAN project (www.recaman.es), with economists, forest engineers, zoologists and ecologists interested in developing properaccounting systems for ecosystem services; and an international team of biologists from 14 European countries interested in the ecology of fear and the adaptation of organism to urban life. He has published more than 100 SCI papers receiving over 3800 citations, as well as several books and book chapters receiving some 8100 citations overall. He has participated in more than 35 national and international research projects, leading 18. He has supervised 8 PhD Theses and 14 MsC Theses and supervises currently two more PhDs, as well as 2-3 graduate students from Spanish universities yearly. He regularly evaluates research projects financed by the Spanish, Argentinean and French governments, as well as manuscripts received by some 40 scientific journals as Oecologia, Ecography, Ecology, Global Change Biology, Ecology, Journal of Applied Ecology, Biological Conservation, Basic and Applied Ecology, Frontiers in Ecology and Environment, Behavioral Ecology and PLoS ONE (https://publons.com/author/890450/mario-diaz#stats).